Counting Down The Days

I am blown away. I can't believe this amazing way that God has shown Himself in my life. He completely delivered on some AMAZING summer plans for me! I have been researching both countries that I will be in, and I'm psyched!

I have learned that music is a really big thing in Liberia and have been downloading some popular songs. They listen to some really cool stuff! I also am learning about the food (little scary) and culture in general. They also have these amazing sheets of fabric called lapas which I can't wait to look at and buy. I plan on having fabrics covering my ceiling in my new apartment. I also want to make shirts using the lapas somehow, maybe as a front pocket. Sarah (my fashionista sister) will have to help me out with this though. I can't wait to learn from the people in Liberia and be able to show them a little bit of me as well, but mostly I hope I get the opportunity to show them a little bit of Jesus as well. They have three dominant religions there: Christianity, Buddhism and another more secret religion. My group will be staying in a christian missionary complex, but my team isn't religiously affiliated. My life is pretty affiliated with Jesus though, so I'm hoping that it shows without many words needed.

also- Here is a fun picture of a project similar to ours that was done in another part of Liberia by a Clemson/U of Michigan team. 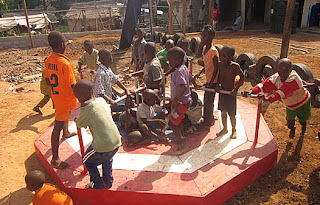 This will be an incentive for kiddos to come to school. And it will have a mounted generator in the center that will generate energy that will store it in a car battery. This battery will then power electricity to the school building, so people who can work during the day can go to school/read at night.

I am also getting so excited for my big trip to Nicaragua! But Liberia has been on the brain more lately because it is so soon! The Nica trip will be so much different than the Liberia trip. I will be forced to make some quick changes between trips (ex. 6 hour time difference), but I know it will be doable. I have found a Dave Z-Say song called "Nicaraguan Nights" and its been on repeat!

I absolutely cannot believe that all of this is actually happening. I don't even have words!

"Why you do not even know what will happen tomorrow. What is your life? You are a mist that appears for a little while and then vanishes. Instead you ought to say, 'If it is the Lord's will, we will live and do this or that.'" James 4:14-15

I am just a small, short-lived mist in this huge plan that God has, and I am so thankful that he allowed me to be such.
Posted by Unknown at 11:49 PM